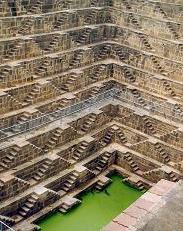 Today’s Writing Group Exercise: Jack and Jill,
tell your own version of the story…

I’ve long been suspicious of the whole Jack and Jill fable we are fed. It seems simple enough and certainly innocent when we are kids, but as I get older I asked more questions and grew ever more suspicious. And then the thought struck me one day…

‘Jack and Jill went up a hill to fetch a pail of water.’

Who the heck builds a well on top of a hill? Accessing water from under the ground is something we humans have been doing probably as long as we’ve been starting fires and drawing risque pictures on cave walls.

I don’t think it took us very long as a species to figure out that the lower you go before you start digging your hole, the less effort the ordeal will require.

You see some of the phenomenal wells dug in antiquity that look almost like inverted skyscrapers carved out of the ground. No easy feat to accomplish in any regard, but why would we make it that much harder on ourselves by starting the project at such high elevation?

What, then, were they really doing up on that hill? How did Jack really break his crown? And what, exactly, what Jill tumbling toward?