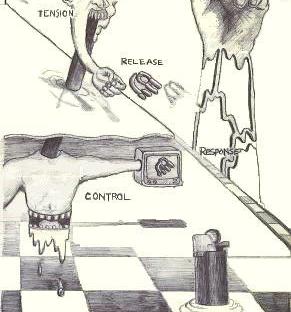 Anyone who has heard me talk about writing at least twice has doubtless heard me say ‘less is more.’ I strive to write efficiently, to say as much as possible with the fewest words. Call it minimalism, call it laziness, call it cutting corners. It forces me around to what I mean to say.

My writing in general began with simple, short entries, poems and songs and little slivers of storytelling, mostly whatever could fit on one page. It seemed the most empty space I could deal with at the time, all the attention I could manage, the thoughts I could handle were just enough to fill up a single sheet of paper, one side.

Over the years my stories have gotten longer, I’m not certain if the ideas have become more complex or if its just the grinding of seizing gears. To this effect, I have formulated a list to consider while we write.

1. Tell only the parts that move your story forward.

And that is all you need to know. Simple, effective. The rest should go without saying.

2. Skip over the boring bits.

By leaving these off we are saying much more, especially reinforcing the notion of brevity. It conveys the idea that some assumptions is necessary, on the part of the reader it helps involve us in the story, it moves beyond a simple attempt at entertainment. It leads us to think a little deeper about the words we read.

As they say in English, the exception proves the rule. Consider what this really means. What if the all the important parts are the ones we end up leaving out?

It leads us to the idea that for every sentence we write, there are two we can cut out later. There are many ways to express essentially the same idea, and we can easily become prone to repeating ourselves. Say it right, say it once. Make your words mean as much as they can; not different definitions, but degrees of description. Every word matters and should speak about as many parts of the story as possible.

This is where writing is different from math. Here we are graded on output, not effort. You need not show your work, in fact it is strongly discouraged. Some sleight of hand is indeed expected, certain tricks we use to maintain the suspension of disbelief. The reader should be able to jump from a string of words to a few pointed conclusions.

Recently the group I write in came upon a new prompt, “Describe someone you know, using their age as the number of words you are allowed.” We drifted apart to ponder, some scrolled through their friend lists on facebook, a few took off their shoes to add up complicated ages. I could write about myself and use up forty-one words. My cat would require sixteen. My niece just had her second birthday and would be the easiest option.

“She’s two.” I wrote, and turned in my homework.

Some may consider this cheating, taking the easy way out. But strictly speaking it is efficient. True, I say very little about the subject of my essay, but it’s worth noting that I am following the rules literally, some would say to an illogical fault. My answer is creative and clever but really gives no information. No work was required on my part as long as I met the qualifications of the challenge.

As a writing lesson, I easily received a high, passing grade. As a math problem it would have been marked ‘zero’ or incomplete.

I had written what was asked and nothing more. I could very easily expand on the subject I chose and would be more than happy to share about my niece for a few happy pages. But it wasn’t asked, and here is the slightly quieter second part of the point; adding any words at all to my answer would have made it technically incorrect.

Use the right words, use your words right. Tell your story and nothing more. Speak your piece and get out. As I always say, “less is more.” Know when to get out, and how to quit while you’re ahead.