Robert Emmett is a writer, artist and musician from Chicago. He spent his formative years in loud experimental rock bands and making weird art.

In January 2014 he published Meowing on the Answering Machine, a collection of short stories and essays. The book has been met with critical acclaim, calling it all variations of hilarious and strange. Tessa B Dick has said it is ‘a book that Philip K Dick could have written… He definitely would have enjoyed reading [it].’

His stories come from the fringes of reality, sometimes conjuring a dreamy atmosphere, other times a sharply focused reflection of the world around us– hilarious and spooky, absurd and authentic.

“Place all beverages on a flat surface, and sallow whatever you’re eating or drinking before you begin reading… you’re liable to lose it if you don’t.”
~ Ted Atoka (author of Fiammetta’s Dream, book ii of the Villa Paradiso Series)

” This book is crammed full of bizarre and fascinating thought provoking, thoroughly enjoyable short stories and ridiculously hilarious (in a subtle, subversive way)there is a remote chance the author is only slightly deranged. But i make you no promises. ” — Sherry Carroll

Robert has written for Eat Sleep Write, The Word Of The Nerd, Modern Man Jack and others. He is currently working on his first novel Aftermarket Soul, which he hopes to have ready early in 2015.

Prior to focusing on writing Robert spent many years playing in bands on guitar or bass and recording his songs. Notable bands include Labrador Dali, Thunk, Mosquitohead and Gut. 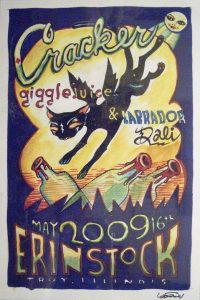 Thunk was notable for the song ‘Creepy Guy’ from the 1995 Melodious Thunk. This song, written by Emmett, received a fair amount of attention and radio airplay.  Labrador Dali had the good fortune to open for the rock band Cracker, one of Robert’s musical heroes.

Robert also draws , creating hundreds of original works over the years. He has produced a few comic strips. His most recent , Making It With Fae Kit, about a young writer just starting out, was featured on Eat, Sleep, Write in 2014.

Most recently, Robert Emmett has begun to produced video experiments incorporating his music or stories or both with his drawings. He has put together a few extremely low tech cartoons which he calls ‘the opposite of animation, they are NONimation.’